There are not many poker players in the world are able to enjoy popularity equal to Viktor Blom’s! The Hendon Mob Poker database ranking the players by their popularity places him only 46th; with Daniel Negreanu, Phil Ivey, and Fedor Holz being ## 1, 2, and 3 respectively. So does Google, feeding much fewer search results for “Viktor Blom poker player” than for the leading triumvirate.

However, his true popularity cannot be measured in such a direct way. Page through poker forums, talk to the people there and see — Viktor Blom’s name is very appealing to those who love poker games. His past victories and failures still stir up a lot of controversies; videos of Viktor Blom playing poker have been watched by millions, and the hands he played ten years ago are still widely discussed!

The Reasons To Be Loved and Hated

Poker celebrities are normally known for their skills and success; as well as for the money they win at the end of the game!  But things are different with Viktor Blom. His net worth is still unclear. Some people say he is still broke after so many downswings he suffered, and still owes money to some other poker players. But reputable poker analysts would assume his overall bottom line balance is about $5 million positive. This is far less than the total earnings of many successful poker professionals seem to get talked about a lot less. So, Viktor Blom’s poker cash balance is clearly not the reason he is such a popular poker player!

Skills, styles, and strategies? Difficult to say. Viktor Blom has made many mistakes during his career, and some of these were, perhaps, too costly. His gaming style is often called too aggressive and even loose, and his hell-for-leather multi-tabling heads-up strategy, especially at the early stage of his career, has been heavily criticized. But there have been many games and whole tournaments he played where he clearly demonstrated his sharp intelligence, extremely high poker IQ and fine-tuned intuition. So, as far as his poker proficiency is concerned, many still believed by many to be a genius whose true potential has yet to open fully.

And yes, he has got haters!  There is quite a bunch of people who would call him a degenerate, a tyke, a dipstick, or even gay! They generally insist Viktor Blom’s “poker greatness” is heavily overestimated. Many Blom’s critics stress that his ways of learning and training do not stand up against criticism; as he says he learns and trains mainly through playing, and he never uses special training software, or any of the other advanced methods other poker pros often benefit from!

Viktor Blom, born in 1990, is a young poker phenomenon from Sweden who has won and lost countless millions in poker, his winning and losing streaks changing places sometimes in the course of a single day!  He has played for some of the biggest pots in the history of online poker. His upswings and downswings have become legendary, his net worth is a mystery, and with his every appearance by the felt, whether virtual or real,  many railbirds gather, ready and eager to see what kind of a somersault Viktor Blom is going to do this time! 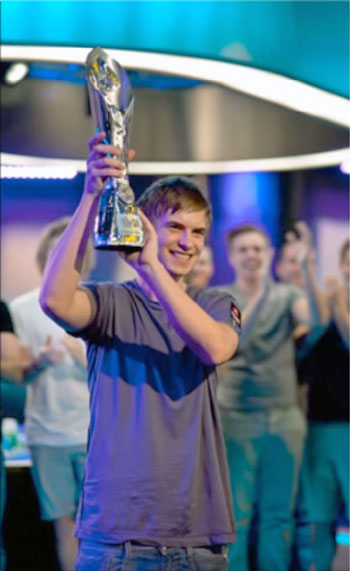 But he is an introvert. He is calm and quiet, and not known for any kind of scandalous behavior. His personality is kind and bright, and his character is very mild — that is what people who know him well would say about him! So if he is a badass, then this is only in poker, and this might well be one of the main reasons for his high level of popularity.

And he is a really very good player. His hands and styles are worth studying, his decisions are getting more well-weighed, and his tournament strategies more rational and efficient. His future in the world of poker seems a very bright one, and it will be very interesting to track his progress!

Having Fun and Loving Poker

Perhaps, the most important thing is that he loves poker games very much, and he tends to have a lot of fun playing it! He has been through ground-zero bankroll depletion, at least several times; but it seems that any stress that may have arisen from losing millions has no major influence on him. And while a certain disdain for money is necessary for a poker player (just to help you handle the pressure of losing big sums!), in Blom’s case this must be working a rather different way.

For after all: the money he wins and loses is just an instrument for him to have fun playing at high stakes. It is not the money he earns or needs for living. He is having fun playing poker because this is the game he really loves! He learns poker games himself and by experience, by playing as many hands as possible! These poker ways of Viktor Blom may be not the most efficient in terms of besting his opponents or gaining big wins on a regular basis. But his poker methods are definitely infectious! They resonate with many poker lovers around the world, regardless of the stakes they might play, just because they love the game and have fun playing it — every bit as much as Viktor Blom does!